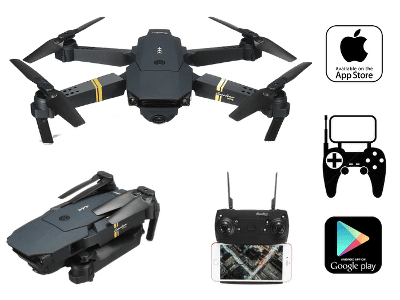 What is the Drone Blade 720? It is a foldable drone equipped with several sophistications: it has a High Resolution camera, optical flow sensors and intelligent maneuvers control.

I figured that it was too hard to find out information about the drone Blade 720, so I compiled this complete review with videos and fotos about this mini drone, to help you decide if it is the right fit for you.  Enjoy it!

Features of the Drone Blade 720

Remote control: Included 2.4 GHZ folding remote control, which attaches to your mobile phone to so you can view the images and video during the flight. Works with 3 AA batteries. 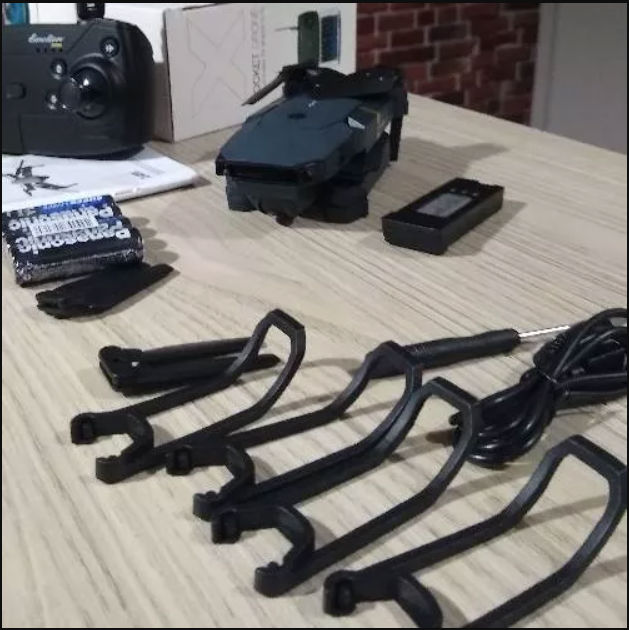 From the moment I removed the drone from the packaging, I could see that this drone Blade 720 is very compact and is a quality gadget.

But if you’ve never flew a drone before, this X Pro drone is very good option for you to start, without being afraid to hit it during thes first flights and break it! 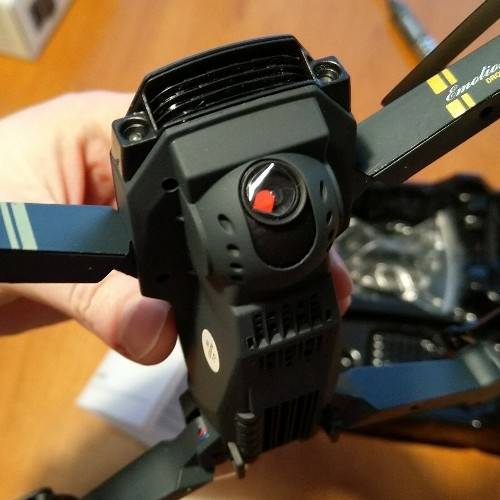 Smartphone Control: Connect the drone to your phone of any operating system. You can use the smartphone to fly the drone, on simply as a live footage screen (and recorder).

Headless Mode: You can fly it in any direction. Find out more about this further below.

Draw Flight Path: I can simply draw the flight path I want on my smartphone display and the drone will execute it. 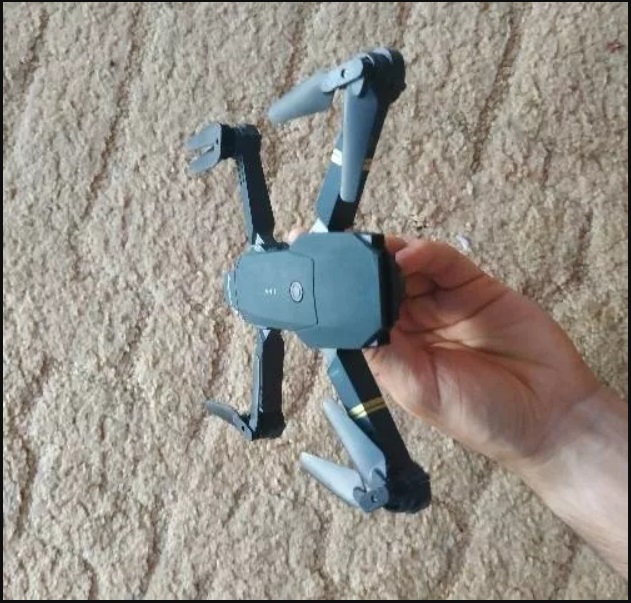 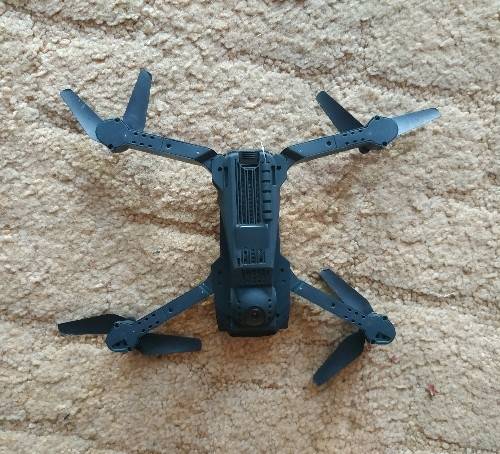 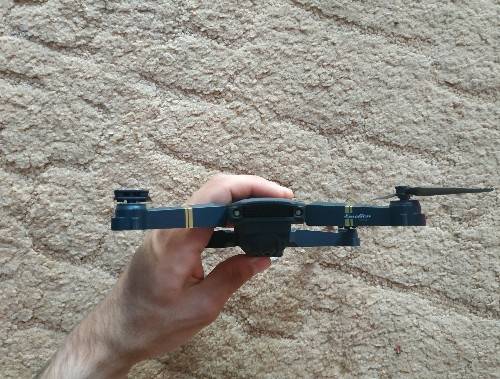 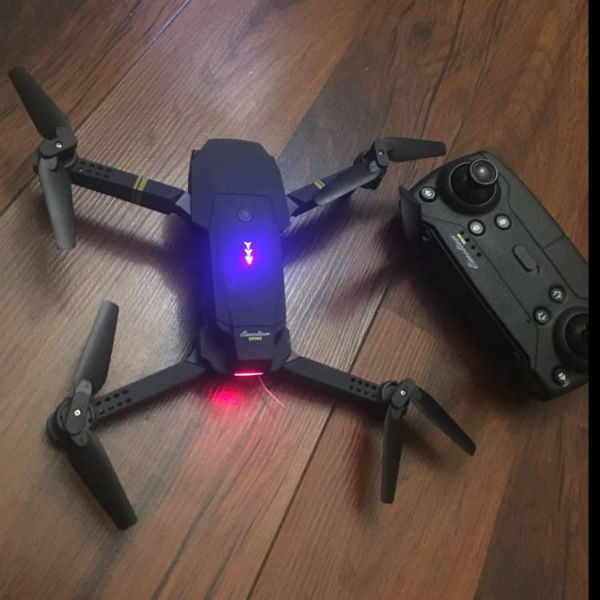 It is compatible with any Samsung, LG, Nokia, Motorola, Sony and Iphone cell phone. I have a Motorola Moto G2 phone, and I was able to connect the Blade on the remote to monitor the flight without any difficulty, I just needed to install the Blade APP to connect it to my smartphone.

First you will need to download the drone App (JY UFO) on your phone and install it.

Place your cell phone into the remote control storage.

Then turn on the drone. It will start its own WIFI 2.4Ghz network. Now it is time to connect your cell phone to the drone WIFI network.

You can now start the App, clicking on the “Play” button, and you will see right away the drone live footage. 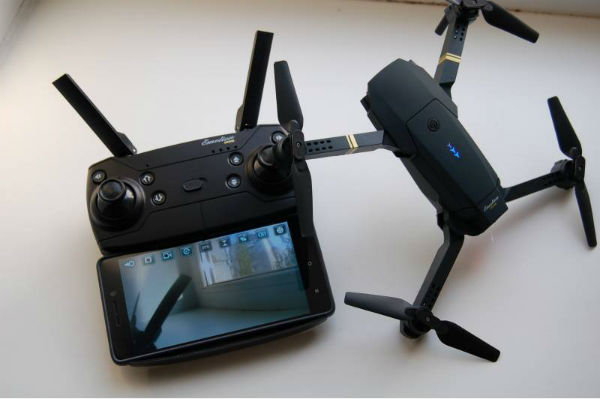 Turn on the remote using the button in the middle and move the letf joystick up and down.

The connection is confirmed with a beep, and blinking frequency of the drone is changed and finally paired. Then press the arrow up button and it flies.

You can see all these instructions of how to fly it in the video below.

Also there are some fine tune buttons. When wind hits the drone it can drift a little bit, and with these buttons you can compensate that.

If it is moderate wind, you have to have some skills to control it.

This drone is a “toy”, that’s the main reason to buy it. If you just look at it as a 100 dollars range drone, it is a cool device, really fun and worth all your money!

I think the benefits of the drone, especially the price that is quite cheap for a drone of that level, were worth what I have paid.

About its flight experience…

The flying time is about 8 minutes, and for a small drone it’s a great flying time. I could buy more batteries so you can have more time and fun flying it!

Inside it stays really stable while flying, but it is better to use the propellers guards (included) when flying indoors. To do that, you just need to clip the guards on the propeller arms. They protect the propellers from walls and things, but they make the drone heavier and lower the flight time.

The drone speed is increased by tilting the drone in the air, not boosting the rotors. It has 3 levels of speed.

It can perform flips, triggered by the flip buttons on the joystick. Just choose the direction of the flip and it works really well.

You can control the drone with the remote OR only with the smartphone. You have to press the little lock to unlock it and start the motor, then joysticks appear on the smartphone. I don’t recommend to use it like this because it’s harder to control. But a cool feature. You can also move the phone for motion control.

You can draw a path. It is be extremely cool but a little dangerous to do it outside if it is windy; indoors it works fine.

And there is a autopilot function! Crazy, because the professional drones also have that. But it only works in the headless mode.

The headless mode allows when you point the drone forward and start, it remembers that position and rotation and makes it easier for beginners!

It makes harder for you if you want to learn how to fly in the normal modes with the professional drones. So I don’t recommend that mode if you plan to be a drone expert.

A cool function is the return to home function. When the battery gets low the drone automatically flies back to you.

I purchased the Drone Blade 720 on the company’s official website, one of the largests distributors of drones and entertainment products around the world. My purchase was made without any hassle, it was quick and on a secure site. The drone took about 11 days to get to my house. Yes, it took a while, but it was worth it, for the price and for the product itself. The company provided me with all the data regarding delivery and I did not have any problems during the whole process.